29,635 Deaths After C0vid Vaxxines Reported to Vaers, as CDC Adds Novavax to the Mix

The Centers for Disease Control and Prevention (CDC) today released new data showing a total of 1,350,950 reports of adverse events following COVID-19 vaccines were submitted between Dec. 14, 2020, and July 15, 2022, to the Vaccine Adverse Event Reporting System (VAERS). That’s an increase of 9,342 adverse events over the previous week.

VAERS is the primary government-funded system for reporting adverse vaccine reactions in the U.S.

The data included a total of 29,635 reports of deaths — an increase of 175 over the previous week — and 246,676 serious injuries, including deaths, during the same time period — up 3,210 compared with the previous week.

Foreign reports are reports foreign subsidiaries send to U.S. vaccine manufacturers. Under U.S. Food and Drug Administration (FDA) regulations, if a manufacturer is notified of a foreign case report that describes an event that is both serious and does not appear on the product’s labeling, the manufacturer is required to submit the report to VAERS. 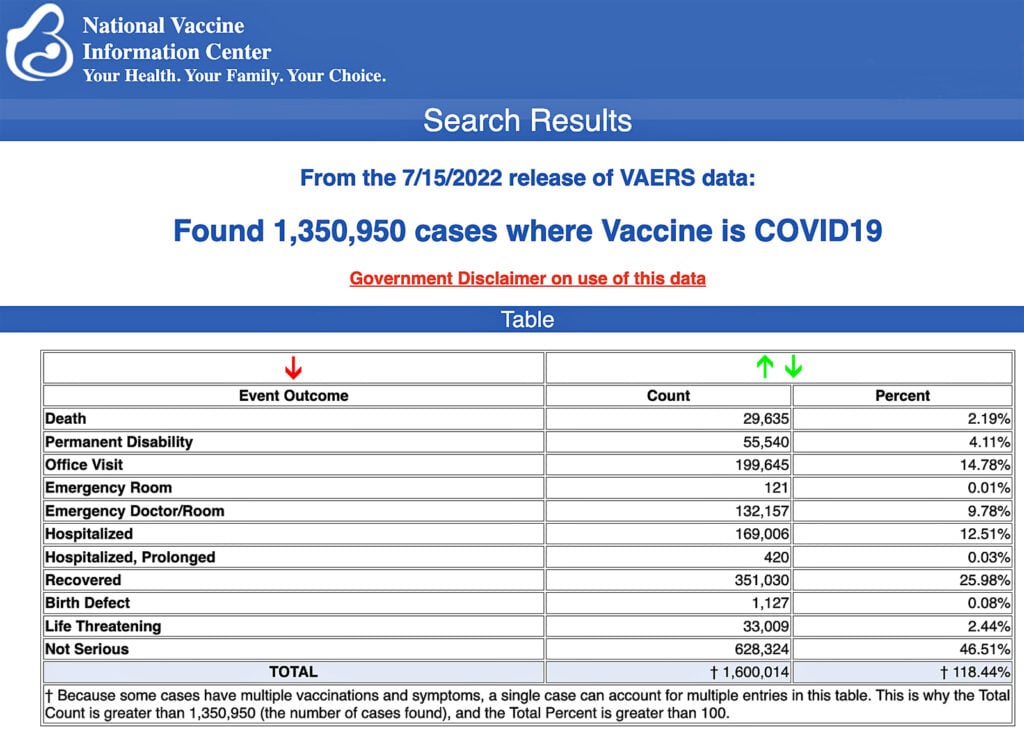 Every Friday, VAERS publishes vaccine injury reports received as of a specified date. Reports submitted to VAERS require further investigation before a causal relationship can be confirmed.

Historically, VAERS has been shown to report only 1% of actual vaccine adverse events.

The CDC uses a narrowed case definition of “myocarditis,” which excludes cases of cardiac arrest, ischemic strokes and deaths due to heart problems that occur before one has the chance to go to the emergency department.

Children’s Health Defense (CHD) asks anyone who has experienced an adverse reaction, to any vaccine, to file a report following these three steps.

Biden: ‘You’re not going to get COVID if you have these vaccinations’

White House Press Secretary Karine Jean-Pierre said Biden’s symptoms are “mild” and he has begun taking Pfizer’s Paxlovid, which is authorized for the treatment of “mild-to-moderate COVID-19” and is associated with rebound COVID-19.

Clinical trials for the drug did not include people who, like Biden, received a COVID-19 vaccine.

When asked during the press briefing where Biden contracted COVID-19, Jean-Pierre said it doesn’t matter — the most important thing is that he was fully vaccinated and double boosted.

After the announcement, a video quickly resurfaced with previous remarks Biden made during a CNN town hall a year ago to the day he was diagnosed with COVID-19.

“You’re not going to get COVID if you have these vaccinations,” Biden said during the event.

It was one year ago today that Biden said this quote: "You're not going to get covid if you have these vaccinations."

1 in 5,000 affected by severe adverse reaction to COVID shots in Germany

The German Federal Ministry of Health on Wednesday admitted 1 of every 5,000 COVID-19 vaccinations cause “serious side effects.”

Although likely an “underestimation” due to voluntary reporting, the admission implies almost 300,000 Americans and Europeans have experienced a severe adverse event after receiving a Pfizer-BioNTech or Moderna vaccine.

The figure came from a Paul Ehrlich Institute (PEI) safety report summarizing suspected cases of side effects and vaccination complications between Dec. 27, 2020, when Germany launched its vaccination campaign, and March 31, 2022.

During the same time period, PEI received 296,233 reports of suspected side effects. The reporting rate was 1.7 per 1,000 vaccine doses for all vaccines combined and 0.2 serious reaction reports per 1,000 doses.

According to PEI, the reported rate of frequent adverse reactions include myocarditis (1.3 cases per 100,000 people), tachycardia (8.19 cases) and lymphadenopathy (11.52 cases).

Approximately 1% (2,810) of cases resulted in death, and 4% of cases reported permanent damage. A total of 5,862 suspected adverse reactions were reported in children and adolescents.

Per U.S. vaccine laws, foreigners must show proof of vaccination upon entering the country. Djokovic, 35, hasn’t been vaccinated against COVID-19 and may miss out on the US Open because of his vaccination status.

“The COVID-19 vaccines, all of them, in the medical literature, there are over 200 papers, they all cause heart damage and that is the last thing that an athlete can possibly risk,” McCullough said.

“Heart damage can lead to heart failure or tragically, sudden death. He has clearly made the right choice and the vaccine injuries extend beyond the heart. There can be damage to the skeletal muscle, the nerves, the brain, so much of what an elite tennis player is, is at risk when they take a COVID-19 vaccine.”

Djokovic, who recently won Wimbledon, confirmed he does not plan on getting a COVID-19 vaccine before the US Open, nor will he force his entry into the U.S.

CDC signs off on Novavax despite concerning side effects

Advisors to the CDC on Tuesday unanimously recommended Novavax’s COVID-19 vaccine, despite a problematic surfactant polysorbate 80 and never-before-approved nanoparticulate adjuvant contained in the vaccine called Matrix-M.

The media portrays the Novavax injection as a “game changer” in comparison to the mRNA and adenovirus-vectored gene therapy shots, claiming it should be “reassuring to those who are hesitant.”

To further entice the unvaccinated to receive COVID-19 vaccines, headlines feature the misleading claim that Novavax’s jab is “free of side effects.”

Yet, a day after the FDA issued Emergency Use Authorization for Novavax, the European Medicines Agency (EMA) made its own announcement, stating it was updating its product information for the Novavax COVID-19 shot to disclose “new” side effects.

The EMA’s list of side effects included “severe allergic reaction [anaphylaxis] and unusual or decreased feeling in the skin” (called paresthesia and hypoesthesia, respectively).

The EMA also said it is assessing myocarditis and pericarditis as Novavax side effects — safety signals that also were on display in the FDA’s briefing document.

In the largest study of its kind to date, 42% of women who were menstruating regularly reported breakthrough bleeding after receiving a COVID-19 vaccine.

The survey sample included 39,129 currently and formerly menstruating participants between the ages of 18 and 80 years old who were fully vaccinated with Pfizer-BioNTech, Moderna, J&J, Novavax or AstraZeneca vaccines and had not previously had COVID-19.

Among participants who typically do not menstruate, 71% of people on long-acting contraceptives, 39% of people on gender-affirming hormones and 66% of postmenopausal women reported breakthrough bleeding. 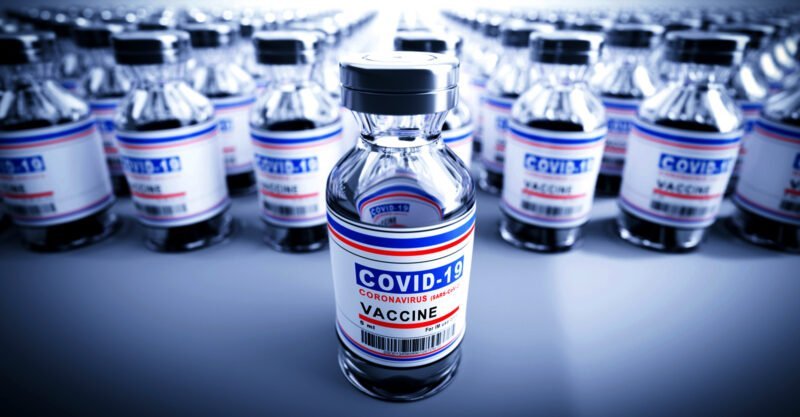