This is Ashleigh’s story as told by her sister in law Kimberly:

My sister-in-law Ashleigh got her Pfizer Vaccine in March, the 2nd one in April, and she passed away just 6 months after. The doctor reported it to the CDC, DDA, and the state. She left behind an 8-year-old daughter I am now raising.

Initially, she went to the hospital where she lived, and they gave her IVs for dehydration and were told that because she smoked weed, that is why she was throwing up, that the ” weed ” was causing her to throw up. Although she told them THE NON STOP VOMITING BEGAN AFTER receiving the vaccine. She followed up with her regular doctor, who told her it was possibly her thyroid. She had tests done and even a biopsy on her thyroid, and everything came back normal. My sister came to visit us in May and when my husband and kids saw her we knew she needed to come to stay with us so we can care for her and her daughter and get her to the hospital and doctors here in Southern California to get answers to why she was so sick. At the end of June, she came to stay with us. I took her to the hospital a few days after her being with us; she was there for a week. No answers are still throwing up even on IV anti-nausea. No one would listen or wanted to even consider that she was sick because of the vaccine. She was very discouraged and so were we.

In August she saw a doctor and they said they wanted her to see a thyroid doctor because of how much weight she lost in a short amount of time and the hospital couldn’t find ” anything wrong ” or ” reason for her sickness ” or the rapid health decline and dramatic weight loss. This doctor wouldn’t consider that it may be the vaccine. Even though it all started after receiving both of the Pfizer. By September she was now so bad she fell, choked on her own vomit, and I found her on the ground in my kitchen not conscious. I was able to get her awake and she instantly grabbed her throat. I then sat her up and was able to dislodge the vomit that she choked on. After this, we saw her doctor, where she was told to ” chew her food up more ” and ” try to eat smaller portions ” She literally ate and threw up everything, and she would turn around and eat more just to try to hold something down. Within two weeks, she couldn’t walk anymore, dress, or sit up in bed without help.

On September 20th, I called 911 because she was awake but not responding to anything I was saying. I went to the hospital where I was greeted by a wonderful doctor. My sister was alert again and was able to talk to that particular doctor and me. She let him know everything that had happened since getting the vaccine. He was the one who said that this was indeed a horrible adverse reaction to the vaccine. He reported to FDA, CDC, and the state.

Unfortunately, because the vaccine caused her to throw up so much, her body was like someone who is anorexic. Her body was starving itself and started to eat itself so she had no muscle strength anymore. They said that is why she was not able to walk or do things anymore. Also, due to the throwing up so much on anti-nausea, it was harsher on her body and she ended up getting a tear in her esophagus that food and throw up got into that causing a bacterial infection.

Within two weeks of being back in the hospital, she declined so much that she was found unable to make decisions for herself and I was appointed to do them. For her as that was her wish she had signed when she went in. I agreed to a feeding tube to see if they could get her better, but she just declined even more. It’s so bad that she could only say 3 words at a time with long pauses in between. And most of it was I don’t know or not sure. On October 6th, I got the call that she wasn’t going to make it that her kidneys were shutting down, and she was weak. Unfortunately, because my husband and I were “unvaxxed” we were not even allowed to visit her the entire time! But my oldest son, who did get the vaccine was able to and he regularly visited her and took pics of her and gave us his version of how she seemed since I was only getting updates from nurses and since I was only getting updates from nurses and doctors throughout the day.

On October 6th my husband and adult kids were allowed into the hospital to be with her when she passed and to say goodbye. I had to fight to get us in, but it worked. As soon as we went in, she started talking to us. The nurses and doctors were shocked; they said she definitely was waiting for us. My son was so shocked because she hadn’t talked to him in weeks. She told us she was going to heaven she loved us and was sorry. She passed away 5 hours after this with her brother, my husband, and me by her side. She suffered a lot but died peacefully. Before the vaccine she weighed 145lbs. In June, she was 95 lbs on September 20th; she was 61 lbs. So, she lost 84 lbs in 6 months. Ashleigh, a loving mother, and sister died after taking the vaccine. 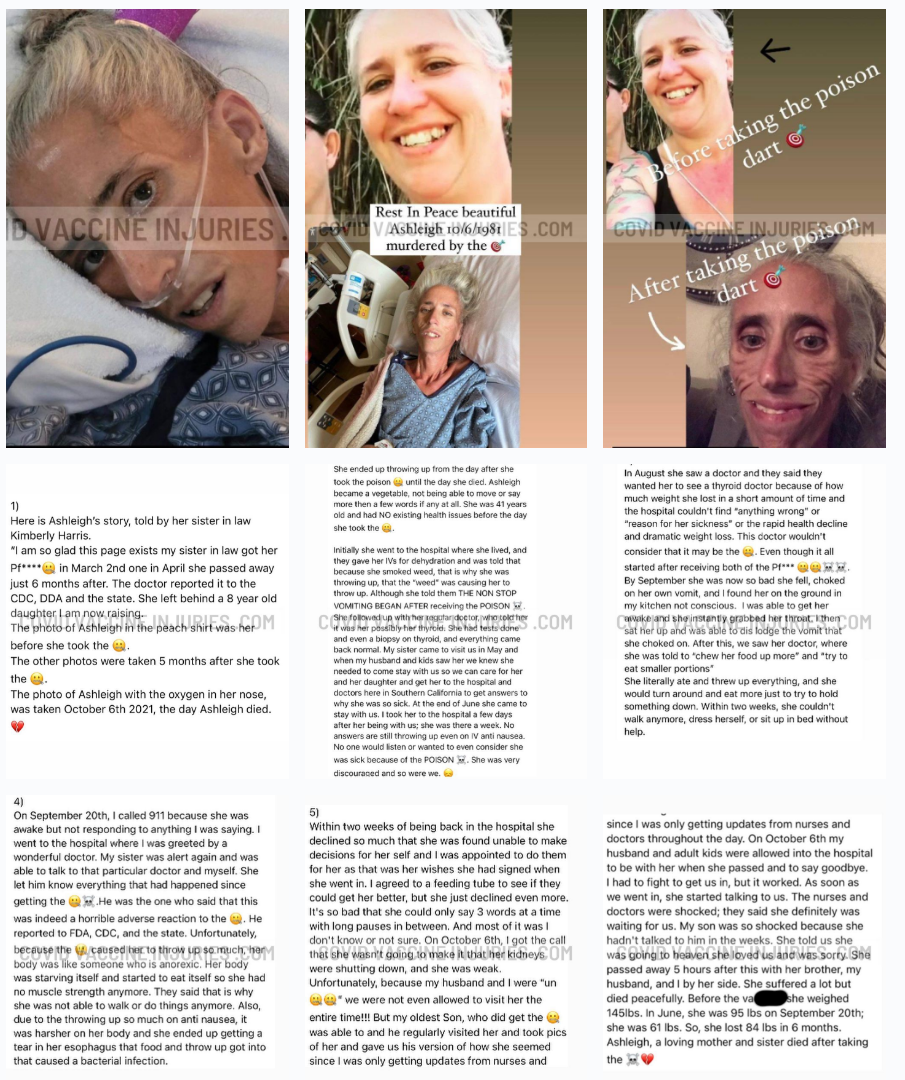 PrevPrevious17-Year-Old Died ‘Suddenly in Sleep’ 6 Months After 2nd Pfizer Shot
NextFoo Fighters Drummer Taylor Hawkins Dead at 50: The Inside Story on What Likely Caused His DeathNext
Scroll to Top