A short collection of key pieces of evidence showing the COVID vaccines are not “safe and effective.” Not even close. They are the most deadly vaccines we’ve ever produced. 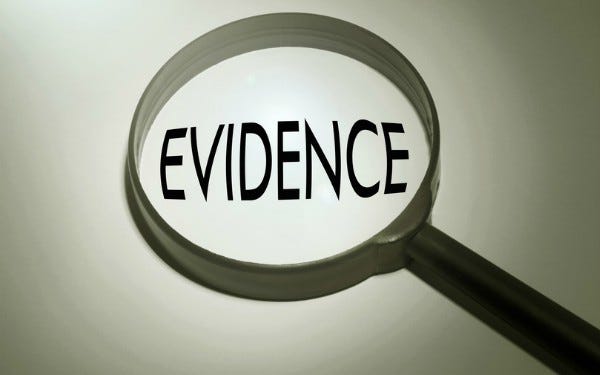 Here’s a high level collection of some of the most compelling pieces of evidence I’ve seen to date. This is not an exhaustive list, but just the key pieces of data that are impossible to explain if the vaccines are safe and effective.

I’ve divided the collection into sections and I’ve tried to limit each section to the most compelling data points. So don’t be disappointed if your favorite item isn’t mentioned in this article; I wanted to keep it short enough to be read..

I’ll try to keep this updated over time. It can be found in the Reference section of my Substack.

There are specialized tests required to diagnose a death from the COVID vaccine.

The CDC has never told any medical examiner in the US about these tests.

So the medical examiners aren’t implicating the vaccine in any of the deaths.

This paper, A Report on Myocarditis Adverse Events in the U.S. Vaccine Adverse Events Reporting System (VAERS) in Association with COVID-19 Injectable Biological Products, was retracted because the publisher didn’t like the result. So he unilaterally decided to retract the paper. This is unethical.

Here is the backstory as well as this censorship update.

The publisher hasn’t fixed the problem in over a year despite assurances it would be quickly resolved.

Here is another retracted paper that was correct:

Why are we vaccinating children against COVID-19? by Ron Kostoff
“Compared with the 28,000 deaths the CDC stated were due to COVID-19 and not associated morbidities for the 65+ age range, the inoculation-based deaths are an order-of-magnitude greater than the COVID-19 deaths!”

That is basically what I found: the vaccines kill >10X more people than the number of COVID deaths that they save. The paper passed peer review and was published. The editor of the journal quit after he was overridden by the publisher on the retraction.

The reason cited for the retraction:

This is completely bogus for two reasons:

Can anyone explain how these anecdotes are possible?

Once I established a policy of always recording calls with “fact checkers,” I’ve not had a single call from them trying to refute anything I’ve written.

None of the drug companies that make these products will refute anything I’ve written or supply a representative to debate me or any of my colleagues in a live debate. They have immunity from liability and they are not willing to be held accountable in the court of public opinion either.

This was a very well done study, but it is of course attacked by the pro narrative people. We’d love to have an open debate about this study, but the other side doesn’t want to talk about it in a neutral forum.

Masks don’t work at all. See this article which has plenty of references. If anything, masks are more likely to hurt you than to benefit you.

There is no study at all on the 6 foot distance rule. They just made that one up.

Origin of the virus investigation

Professor Jeffrey Sachs was tasked by The Lancet to lead an independent investigation into the source of the SARS-CoV-2 virus. After he determined it came from US biotechnology, all of a sudden nobody wanted to pursue the investigation any further.

Questions I’d love to get the answer to. These were asked, but never answered.

This is a problem. I am not aware of any paper published in the medical literature that shows that such tactics result in better health decisions.

Should we use the same rules at the UN when nations disagree? Do you think that will result in better outcomes?

The way people resolve differences is by confronting the issues and talking through them. But we are not doing this:

Articles about the corruption of science

This is objective proof of a broken system. It is indefensible. Caught on video camera. There is no reason that anyone in a position of authority on the COVID vaccines would refuse an opportunity to see the most thorough post-vaccine safety study ever done: one that shows causality of serious adverse events.

Professor Grace Lee should be removed from her position by the CDC. Why isn’t she? Does anyone care?

If the above isn’t enough, there are hundreds more “hard to explain” data points.

Using all the available evidence

There is an excellent article written in August 2020 by Norman Doidge entitled “Medicine’s Fundamentalists” which talks about the “all-available-evidence approach.” It should be read by every doctor in America. This is how medical science should work.

The precautionary principle of medicine

The precautionary principle medicine seems to have been thrown under the bus during the pandemic. It says in the face of uncertainty, one should take reasonable measures to avoid threats that are serious and plausible.

For example, the Pfizer clinical trial showed the vaccine saved only one COVID death per 22,000 injected. That means we might only save around 10,000 lives if we inject 200M Americans. So if VAERS, which is at least 41 times under reported, is showing over 12,000 deaths associated with the vaccine, any reasonable person should say that killing more than 41 people to save 1 life is nonsensical… shouldn’t we put a PAUSE on this intervention until we resolve the uncertainty?

In the current system, questioning the CDC or other authorities results in serious retribution as mentioned earlier.

Is that really the right way to handle scientific dissent?

Are the vaccines “safe and effective” as claimed?

All the data that I and my colleagues have seen end up being placed in the “not” bucket.

We are open to being shown we got it wrong on the hundreds of pieces of evidence we have examined, but nobody is willing to discuss the data with us to resolve the issue, not even for $1M dollars.

I even went to extraordinary lengths to offer the Israeli safety data to ACIP Chair Grace Lee. Her response: she called the police on me. That pretty much tells you everything you need to know: they simply refuse to look at any data that goes against their currently held beliefs. That’s the way science works.