FDA Weighing Moderna Vax for Kids 6 and Under, but Experts Say Trials Inadequate

By The Defender Staff

Moderna plans to seek authorization for its pediatric COVID-19 vaccine for kids 6 and under, but experts say the vaccine maker’s trials for the young age group raise too many questions.

Moderna last week said it will seek Emergency Use Authorization (EUA) for its COVID-19 pediatric vaccine, after announcing its two-dose regimen reduced cases of symptomatic disease by 43.7% in children 6 months to 2 years old and by 35.7% in children ages 2 to 6.

The company said its Phase 2/3 KidCOVE study of its mRNA-1273 in children “successfully met its primary endpoint.”

However, as Politico reported Wednesday, and as experts told The Defender, some doctors and scientists question whether Moderna’s clinical trial data will be sufficient for the U.S. Food and Drug Administration (FDA) to grant EUA for the vaccine.

“Given the other data that surrounds it, I don’t know that it’s a slam dunk that the FDA will move forward in terms of releasing it for emergency use,” Peter Hotez, professor of pediatrics and molecular virology and microbiology at the Baylor College of Medicine, told Politico.

“We’re still learning about the relationship between virus-neutralizing antibodies and effectiveness,” Hotez said, adding the FDA might need to raise its standards.

Experts also raised questions about the risk-benefit ratio of the COVID vaccines for an age group with a statistically insignificant risk of severe illness.

The FDA recently tabled Pfizer’s petition for EUA of its pediatric vaccine for infants and children 6 months to age 5, citing insufficient data on a third dose for children 2 to 4 years old.

Moderna’s trial was designed to analyze the safety, immunogenicity and tolerability of two vaccine doses in healthy children who were administered two 25-microgram doses 28 days apart, according to Clinical Trials Arena.

The trial also encompassed children in the 6- to 12-year-old age group, bringing the total to nearly 11,700 children.

According to Dr. James Campbell, professor of pediatrics and physician-scientist at the Center for Vaccine Development and Global Health at the University of Maryland School of Medicine, adult vaccine trials typically look at larger sample sizes.

Campbell, who tackled dosage studies for children for the Moderna study, said, “Instead of having 30,000 to 45,000 people — half who get the vaccine and half the placebo — we’re enrolling more like a few thousand in each of these age groups.”

Toby Rogers, Ph.D., an expert in statistics and how they relate to vaccine trials, told The Defender that 6,700 participants makes for an undersized trial.

“Researchers would call this ‘intentionally undersized to hide harms,’” Rogers said. “And this is a standard trick that pharmaceutical companies do.”

For the Moderna study, there were about 3,350 participants each in the treatment and placebo groups. An adverse event such as myocarditis might happen one out of 5,000 times, Rogers said.

“Say you experience myocarditis and you call the hospital at midnight and get in the car and go to the hospital, you get kicked out of the trial because you are breaking their protocols. They want you to call their doctors and not the hospital. They do that pretty regularly.”

In context, trials for the polio vaccine had a million participants.

“And now we have trials that are coming in with just a few thousand participants. It’s bad faith. This is just the tip of a large iceberg,” Rogers said.

Moderna’s claim that two shots of its vaccine reduced cases of symptomatic disease by 43.7% in children 6 months to 2 years old and by 35.7% in children ages 2 to 6 means the vaccine falls below the FDA’s 50% efficacy threshold for EUA products.

“No one would argue that 40 percent protection is great,” Dr. Chandy John, a pediatrician at Indiana University, told The Atlantic.

Bridging studies are used in lieu of duplicating large-scale efficacy trials. Researchers extrapolate efficacy results from one population to predict drug efficacy in another population, according to Bernard Fritzell in a paper published in Developing Biological Standards.

In practice, using immunobridging means that pediatric vaccine researchers looked at an older group from a previous trial, who received a different dose of a vaccine with different ingredients, and decided what level of antibodies in that group were enough to ward off COVID.

They then looked at the younger children’s group to see how many of those participants had that same level of antibodies — a process that is not predictive of an individual’s ability to fight off infections, Rogers said.

“So moving forward, into this mythical future, we predict that this many kids with antibodies will be protected. If this was a legitimate way to do science, you’d never have to do clinical trials in kids, because you could just immunobridge from any population under the sun whenever you wanted to. If you get a clinical trial with zero effect, you are going to finesse it with immunobridging.”

“The term ‘immunobridging’ is simply a fancy way of saying we are going to use antibody titers instead of actual cases of disease prevented as our benchmark,” Nass told The Defender.

“And we will compare the antibody level in one age group to that in another, and if they are comparable, we will say the vaccine works in the new age group,” Nass said.

Nass said the FDA began accepting surrogate markers of efficacy in vaccines years ago for vaccines intended for rare conditions in which there were not sufficient cases to determine actual efficacy in the real world.

“This is simply not the case with COVID. There is plenty of COVID going around. For Moderna to claim the FDA should authorize its vaccine in babies and preschool children because the vaccine led to high antibody levels, when its real-world efficacy (and only against mild symptoms) was only 40% is a bad joke.

“The efficacy level tells you that antibody levels are a poor surrogate for efficacy and should therefore be ignored. Other parts of the immune system contribute to immunity besides neutralizing antibodies.”

“Emergency Use Authorization typically demands a 50% threshold of efficacy for approval,” said Mumper.

“Here, Moderna tries to get around their less-than-50% efficacy results by using a concept called immunobridging, meaning to show that children develop the same immune antibody response as young adults,” Mumper said.

“However, there are problems with assuming antibody response numbers correlate with clinical outcomes.”

Moderna also admitted its study was unable to assess the vaccine’s efficacy against severe disease, hospitalization or death for ages 6 and younger, as participants’ infections were mild or moderate.

The only adverse events the study reported were fevers — 15% of children had fevers higher than 100.4 degrees and 1 in 500 experienced a fever higher than 104 degrees.

Moderna did not disclose if any of the children who participated required hospitalization as a result of the fevers. It did reveal that adverse reactions were more frequently reported after the second dose.

Critics also cited the study’s short duration, though Moderna said it will continue to monitor its participants for 12 months.

“Are we prepared to booster children every three or four months, since the protection from the vaccine is short-lived?” Seneff asked.

The Omicron variation affected the Moderna’s efficacy rates in children, an outcome the company claimed was “as expected.”

But the fact that the virus continues to mutate at a fast rate and the fact that kids 6 and younger are at low risk from COVID makes the vaccine’s use in healthy children questionable, Hamid A. Merchant, subject leader in pharmacy at the University of Huddersfield, UK, said in the Journal of Pharmaceutical Policy and Practice.

“Currently deployed COVID vaccines were designed using the variant that was prevalent in early 2020 and the virus has significantly mutated since then; the breakthrough cases from [the] recent Omicron outbreak is a good example of the rapidly evolving nature of this virus.”

Research in the UK indicates more than 85% of children ages 5 to 11 years have already contracted COVID and have acquired natural immunity, Merchant added.

Politico reported that even though the 5-and-under age group was more likely to be hospitalized for Omicron, children in this age group account for only 0.1% of the deaths from COVID and 3% of COVID cases in the U.S., according to CDC’s own data.

“According to data from most countries, practically no children under the age of 5 have died from COVID,” Nass said. “In the UK and Wales, over two years of the pandemic, only one child without comorbidities (a chronic illness) died from COVID.”

“While CDC claims over 1,000 children have died with COVID, CDC responded to a FOIA request from Informed Consent Action Network that it does not collect and analyze data on healthy children who have died from COVID in the U.S.

“This is hard to believe, but since the New York Times revealed that CDC hides the bulk of the data it collects on COVID, in part to avoid providing tinder to ‘antivaxxers’ regarding poor vaccine efficacy, it may be that CDC did in fact choose not to look at such data.”

A Johns Hopkins’ study that monitored 48,000 children under 18 who were diagnosed with COVID showed there were zero deaths in those without comorbidities. Another study in Nature came to much the same conclusion.

“We know they have fewer ACE2 receptors in their noses, which may be protective. We know they have cross-protection from other infant viruses. We know the jab-generated B cell-specific spike protein antibody response is a very specifically targeted response, and not as broad as the natural symphony of well-orchestrated immune responses children usually mount.”

Rogers this week wrote the harms from COVID vaccines are catastrophic, and benefits are questionable:

“There are now 44,975 [Vaccine Adverse Event Reporting System] reports of adverse events in children following Covid shots, a few of which led to deaths. These reports likely understate harms by a factor of 41 to 100.”

Nass also called out the issue of risk versus benefit for the young age group:

“If we are vaccinating kids to protect grandma, which a Moderna official suggested, it should be noted that that is not considered ethical under U.S. law. You cannot vaccinate kids, and have them take a risk for a marginal benefit to themselves because you are hoping to provide a great benefit to adults.”

Apparently, the majority of parents agree. The Hill reported only 25% of children ages 5 to 11 are vaccinated, even though the FDA authorized vaccines for their age group last October.

“The basic concept is: First do no harm. If a baby’s background risk with COVID is not significantly changed by an mRNA jab, then the shot is not justified. If the jab just prevents mild to moderate infections, is it necessary or desirable?” 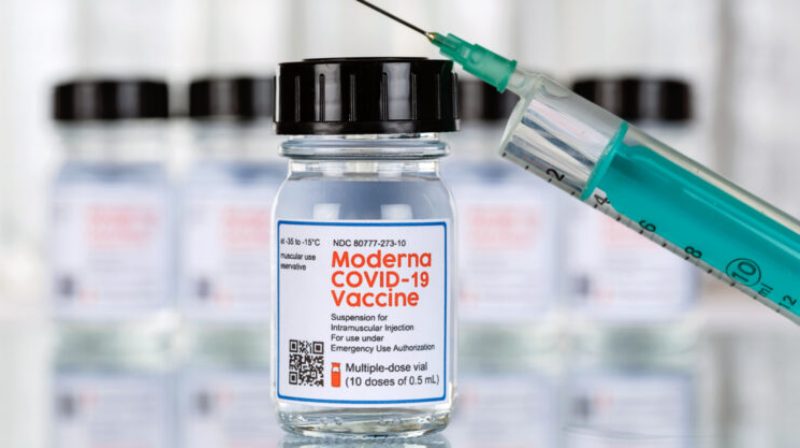