An 18-year-old student died from a blood cot only two weeks after having her Covid vaccination.

Kasey Turner was admitted to hospital after she was experiencing ‘thunder clap’ headaches. An inquest heard the headaches were the result of thrombosis in her sinus cavity.

She was admitted to Barnsley Hospital’s A&E department on the morning of September 23, 2021 with the “worst headache” she had ever experienced. Because of her low platelet count in her blood, doctors initially ruled out a brain haemorrhage.

It was later discovered that the paramedic student was actually suffering from a cerebral venous thrombosis – a blood clot in the sinus cavity. It is believed the blood clot was brought on by the AstraZeneca Covid vaccine, and her inquest found doctors at Barnsley Hospital had “missed opportunities” to diagnose the fatal clot, reports Yorkshire Live.

Kasey received the vaccine two weeks prior to being admitted to hospital as part of the Yorkshire Ambulance Service NHS Trust’s immunisation programme. She was on placement as a frontline worker and was offered her vaccine before it was rolled out to other 18-year-olds.

She suffered all of the “common” side effects of the vaccine but hoped these would last approximately 12 to 18 hours, the inquest heard. But two weeks later she was “screaming in pain” with the “worst headache” she had ever experienced.

Despite this, a CT scan was reported as “normal”. Three days after her admission, Kasey was administered a dose of platelets and her inquest heard that she began to rapidly deteriorate.

She suffered from fits and was “not responding to seizure control”, the inquest heard. She was then incubated and put on a ventilator where doctors performed another CT scan, now revealing the blood clot.

Doctors decided that brain surgery would not be in Kasey’s best interest and could result in “significant brain damage”. After Kasey’s condition did not improve the following day, sedative drugs were withdrawn so doctors could accurately assess her neurological state. She was found to be “brain stem dead” so mechanical ventilation was withdrawn and she died later that day.

The court heard from Professor Michael Makris, a professor of hemostasis and thrombosis at the University of Sheffield, that a fatal condition associated with the AstraZeneca vaccine was discovered.

But this discovery was only made in March 2021, after Kasey had already died. He told the inquest that this condition, known as vaccine-induced immune thrombotic thrombocytopenia (VITT) appeared to be a “key” factor in her death.

When the condition was identified, Professor Makris analysed a sample of Kasey’s blood – which had been kept on record – and found that she had all five “factors” needed to confirm a positive VITT diagnosis. This includes a low platelet count and venous thrombosis.

Recording a narrative verdict, Mrs Rawden agreed that the AstraZeneca vaccine led to Kasey’s death and recorded her death as being the result of a cerebral venous thrombosis, brought on by VITT as a result of the AstraZeneca Covid-19 vaccination.

Had Kasey not been a student paramedic, it was unlikely she would have received the AstraZeneca vaccine, the court heard. Instead, she would have been vaccinated at a later date with other 18-year-olds after it was discovered of the vaccine’s risk on those under the age of 30.

She added: “At the time of Kasey’s death the condition of VITT and thrombosis was not known, and therefore it cannot be said that any change in medical management or earlier identification of the thrombosis would have prevented her death.”

Mrs Rawden added: “There are no words that are adequate to explain the loss of this incredible young lady, that I’m sure would have served her community for many, many years as a paramedic. I’m sorry that she didn’t get to complete that training and I’m sorry that your lives have been so devastated by this terrible tragedy. I don’t think there’s anything that anybody can say.”

‘She was the life and soul of the party’

In a statement read to the court, Kasey’s mum, Donna, said: “I wish that the AstraZeneca vaccine was not offered to Kasey and that she’d waited until it was rolled out to 18-year-olds nationwide.”

Paying tribute to her daughter, Donna said: “Since learning to talk she would never shut up, constantly talking about any random rubbish just so that she could talk. She was the biggest drama queen you could ever meet, she had no filter and she told it how it was and told people what she thought, regardless of what the outcome would be.

“Kasey was the life and soul of the party, she’d light up every room that she walked into and was the most caring person. She was loved by so many, she made an impact on everybody she ever met and no one will ever forget her. She made her family so proud every day.

“She was definitely one of a kind and I will never meet anyone else quite like her. Losing Kasey so suddenly when she was healthy and just starting out on the pathway to her chosen career has absolutely broken me and our family. I never thought I would have to say goodbye to my 18-year-old daughter in such sudden circumstances.” 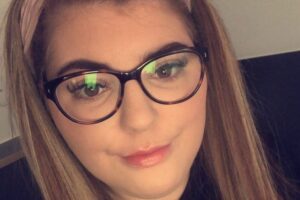