Women say they are having heavier and more painful PERIODS since getting their COVID-19 vaccines.

By CARLY STERN FOR DAILYMAIL.COM

Several women say they have experienced heavier and more painful periods since getting the COVID-19 vaccine, with some also revealing that they have had breakthrough bleeding in the middle of a cycle after getting the shot.

Dr. Kate Clancy, an associate professor at the University of Illinois, tweeted in February that she’d been hearing about people who had experienced changes in their menstruation since getting one or two vaccine shots.

Her Twitter thread has prompted more women to share their own menstrual concerns, revealing their heavy flow, worsened cramps, and irregular timing since getting the jab — with one woman saying she spent 16 days bleeding after getting the Johnson & Johnson shot. 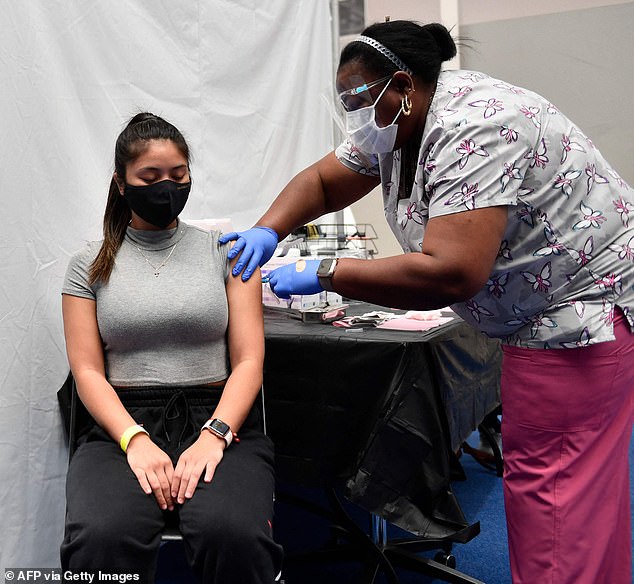 Dr. Clancy first tweeted on February 24, but her thread has continued to find other Twitter users who are seeking out explanations for their symptoms.

‘A colleague told me she has heard from others that their periods were heavy post-vax,’ she wrote.

‘I’m curious whether other menstruators have noticed changes too? I’m a week and a half out from dose 1 of Moderna, got my period maybe a day or so early, and am gushing like I’m in my 20s again.

‘I’m on day 3 of my period and am still swapping out extra long overnight pads a few times a day. Typical for me at this time is maybe one or two regular pads (though extra absorbent, Always Infinity ones) for the whole day,’ she went on.

‘Does this have to do with the way the vax response is mounting a broader inflammatory response, possibly moreso because of the lipid nanoparticle or mRNA mechanism? Either way I am fascinated! Inflammation + tissue remodeling = extra bleedypants!’ she added.

Soon, other Twitter users were chiming in with their own experiences. Though several have said that their periods have not changed, many who have taken the time to comment reported differences. 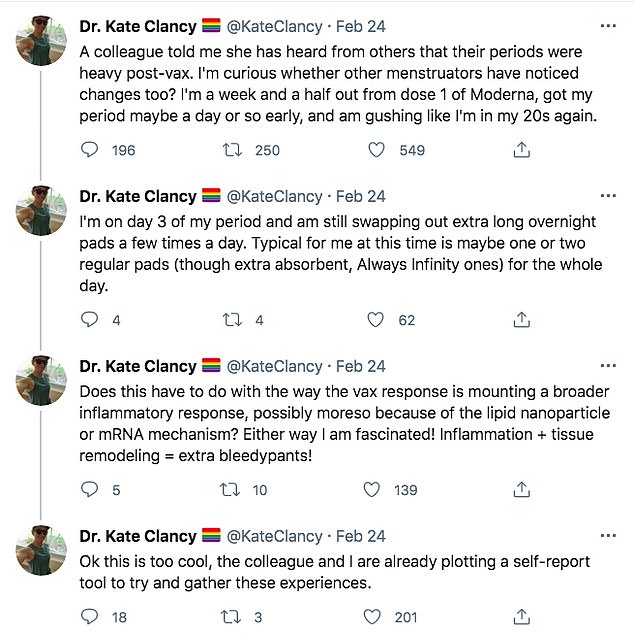 Viral: Dr. Kate Clancy, an associate professor at the University of Illinois, tweeted in February that she’d been hearing talk of people who had experienced changes in their menstruation

The most common changes include heavier periods and those that start in the middle of a cycle.

‘I got J&J on March 15, then started my period about 2 days later — over a week early. It was heavier than normal,’ wrote one.

‘Two weeks exactly after shot number 2, my cycle started 12 days earlier and heavier than it’s been for the last three years,’ said another.

‘I am 3 weeks out from my first Moderna shot and started my period in the middle of a BC pack. That’s never happened to me in 12 years of taking the pill. I never even spot between periods,’ wrote one more.

‘My period following 1st Moderna dose came a week early and was the most painful I’ve ever had,’ tweeted yet another. ‘After second dose it came almost two weeks late and my cycle has been regular for years so I knew it was the vaccine but felt scared to say so.’

‘I thought I was going CRAZY,’ another answered. ‘I got the J&J shot three days before my period started and it’s now been…. 16 days of bleeding (normal period for 5 days then light but consistent bleeding for the rest).’

‘Me too!’ wrote one more. ‘I have an IUD and haven’t had a period in years, but am having cramps and spotting today (1st dose Pfizer was yesterday). No big deal, absolutely worth it, but strange!’

Monica Grohne, the founder of Marea Wellness, said her company has ‘been hearing from thousands of women about COVID & the vaccine affecting their periods.’

Others have discussed their own experiences on Reddit, with hundreds of other commenters chiming in.

‘I had my first Pfizer vaccine on Friday, had sore breasts on Sunday and started my period yesterday. It’s two weeks early. I have been regular as clockwork on a 26-28 day cycle since they started 25 years ago,’ wrote one.

‘Mine was on time but super heavy which is not my norm,’ said another.

However, it’s worth noting that women who have not experienced changes to their periods would be less likely to comment in such threads.

To investigate further, Dr. Clancy has since created a survey that is open to adults who have had at least one menstrual period over the course of their life and have received at least one COVID-19 vaccination shot.

Side effects: Monica Grohne, the founder of Marea Wellness, said her company has ‘been hearing from thousands of women about COVID & the vaccine affecting their periods’

Meanwhile, in the US, the Centers for Disease Control and Prevention has its own Vaccine Adverse Event Reporting System.

According to Health, experts aren’t sure why some women might see changes to their periods, and so far there is not enough data to know.

Infectious disease expert Amesh A. Adalja, MD, a senior scholar at the Johns Hopkins Center for Health Security in Maryland, suggested that any additional pain may just be related to normal vaccine pain.

‘There is no biologic mechanism that would account for [the] disruption of the menstrual cycle following receipt of the COVID-19 vaccine,’ Mark Turrentine, MD, professor of obstetrics and gynecology at Baylor College of Medicine in Texas, said.

He also said that bleeding changes did not come up as side effect during clinical trials.

While there is no hard data on post-vaccine periods yet, a small study of 177 patients published in the journal Reproductive BioMedicine Online in January found that 25 per cent of women who had the actual virus — not the vaccine — experienced ‘menstrual volume changes’ and 19 per cent had longer-than-usual periods. 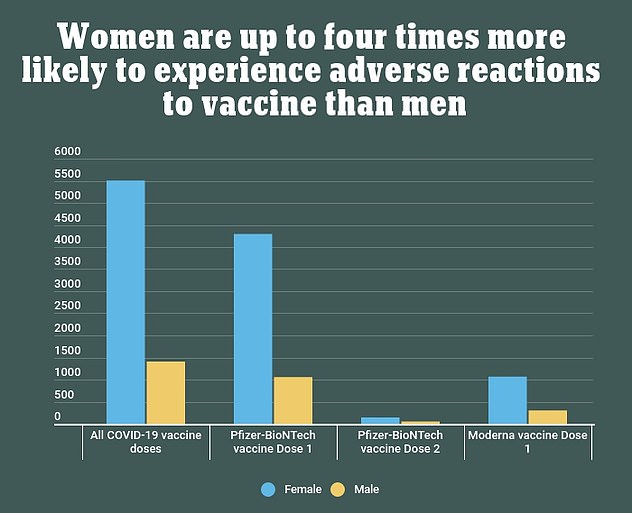 Statistics: Women are more likely to report worse side effects after receiving them then men are, CDC data reveals

On Facebook, a global support group for long COVID sufferers with more than 22,000 female members is host to scores of discussions about a sudden lack of periods, and concerns about fertility.

One poll of more than 100 members with long COVID found 80 per cent reported their periods had changed since being infected with COVID.

As for the vaccine, women are more likely to report worse side effects after receiving them then men are, CDC data reveals.

They found that nearly 80 percent of the reactions were reported by women, making them four times more likely to report a side effect than men.

This held true whether they were receiving the Pfizer-BioNTech vaccine or the Moderna vaccine, and is despite the fact that women are less likely to fall severely ill from COVID-19 than men are.