Translation: Injected people have no immune system thus they are no longer able to combat a simple sniffle. Meanwhile, we want to keep pushing the jabs. 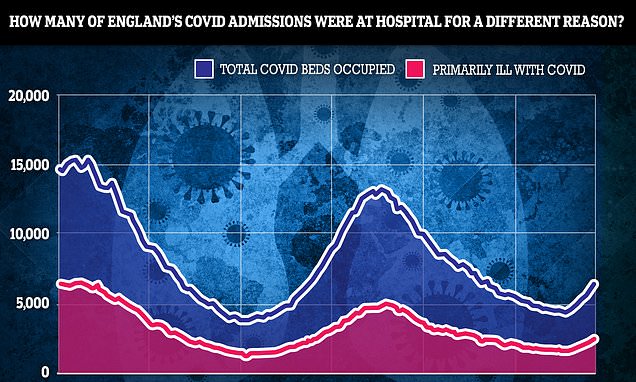 Experts warn the UK is ALREADY at the start of a ‘devastating’ new Covid wave that could cripple the NHS this winter – amid fears Omicron variants are dodging immunity as cases surge 14% in a week.

Britain is already at the start of a ‘devastating’ new Covid wave that may cripple the NHS this winter, experts have warned.

Early data revealed that new subvariants of Omicron are ‘evolving around the immunity’ that was built up through vaccinations and Covid infections.

Some scientists fear the new immune-evasive variants may cause ‘real problems’ for the ‘already on its knees’ NHS as the cold weather approaches and seasonal pressures begin to bite.

Others have insisted that an autumn wave was inevitable. Despite fears of a resurgence, Liz Truss’s Government is unlikely to bring back any pandemic-era restrictions because sky-high immunity rates have morphed the disease into something that closer resembles flu — a seasonal virus the country lives with every year.

The jump marked the first sustained rise since mid-July, when the summer wave peaked and ministers faced calls to bring back economically-crippling curbs which were axed as part of the ‘living with Covid’ approach.

Officials allege a drop in testing and the inadequate surveillance of new immune-evasive subvariants — a knock-on effect of No10’s new approach — has created the ‘perfect storm’ for another Covid spike.

Covid experts say the immune-evasive variants of the virus are already ‘starting to cause a slight increase in infections’.

‘It looks like we’re in the start of the next wave and this time it’s affected older people slightly earlier than the last wave,’ Professor Tim Spector, an epidemiologist and co-founder of the Covid ZOE app, told The Independent.

He explained that symptoms are also presenting themselves slightly differently than in prior variants, meaning many infected individuals aren’t seeking Covid tests.

‘Many people are still using the government guidelines about symptoms which are wrong,’ Professor Spector argued.

‘At the moment, Covid starts in two-thirds of people with a sore throat. Fever and loss of smell are really rare now – so many old people may not think they’ve got Covid. They’d say it’s a cold and not be tested.’

‘We’ve really taken our eye off the ball with Covid tests,’ said University of Warwick virologist Professor Lawrence Young. ‘We can only detect variants or know what’s coming by doing sequencing from PCR testing, and that’s not going on anywhere near the extent it was a year ago.

‘People are going to get various infections over the winter but won’t know what they are because free tests aren’t available – it’s going to be a problem.

‘Another angle is the economic pressure. If people do feel poorly they’re not likely to take time off work. You have a perfect storm here, really, of inadequate surveillance, people not coming forward for vaccination and the economic situation.’

Health experts have also found that the newer variants of Omicron – BA.2.75.2 derived from BA.2, and BQ1.1 derived from BA.5 – have been able to partially escape the immune system.

‘What’s interesting about these variants is that although they’re slightly different in how they’ve come about they’ve come up with the same changes to get around the body’s immune system,’ Professor Young told the newspaper.

‘What we’re finding is the virus is evolving around the immunity that’s been built up through vaccines and countless infections people have had.’

He added: ‘The biggest concern we’re seeing is that in early data these variants are starting to cause a slight increase in infections.

‘In a way, this was to be expected but it does demonstrate that we’re not out of the woods yet at all with this virus, sadly.’

Both professors have called on the government to make ‘stronger and proactive messaging’ ahead of the looming winter.

Professor Young, repeating calls made by public health experts, urged people to get their booster jabs, noting how the new bivalent vaccine boosters tackle multiple variants — which is ‘key to preventing a devastating wave’.

He did acknowledge there are still questions surrounding how effective immunisation would be at preventing vulnerable individuals from falling ill.

The virologist also called for the return of masking at ‘crowded indoor spaces’ and areas that are ‘poorly ventilated’.

‘While cases are currently on their way up, we do not yet know the full extent of what is coming in autumn and winter,’ he said.

‘However, with mass-participation events like the football World Cup taking place in November, international travel growing rapidly, differing vaccination levels across the world, and with most countries having relaxed entry requirements, a rise in cases and emergence of newer variants cannot be ruled out.’

The experts’ concerns come as NHS statistics released Friday showed a 48 per cent weekly uptick in the number of infected patients in England needing treatment. 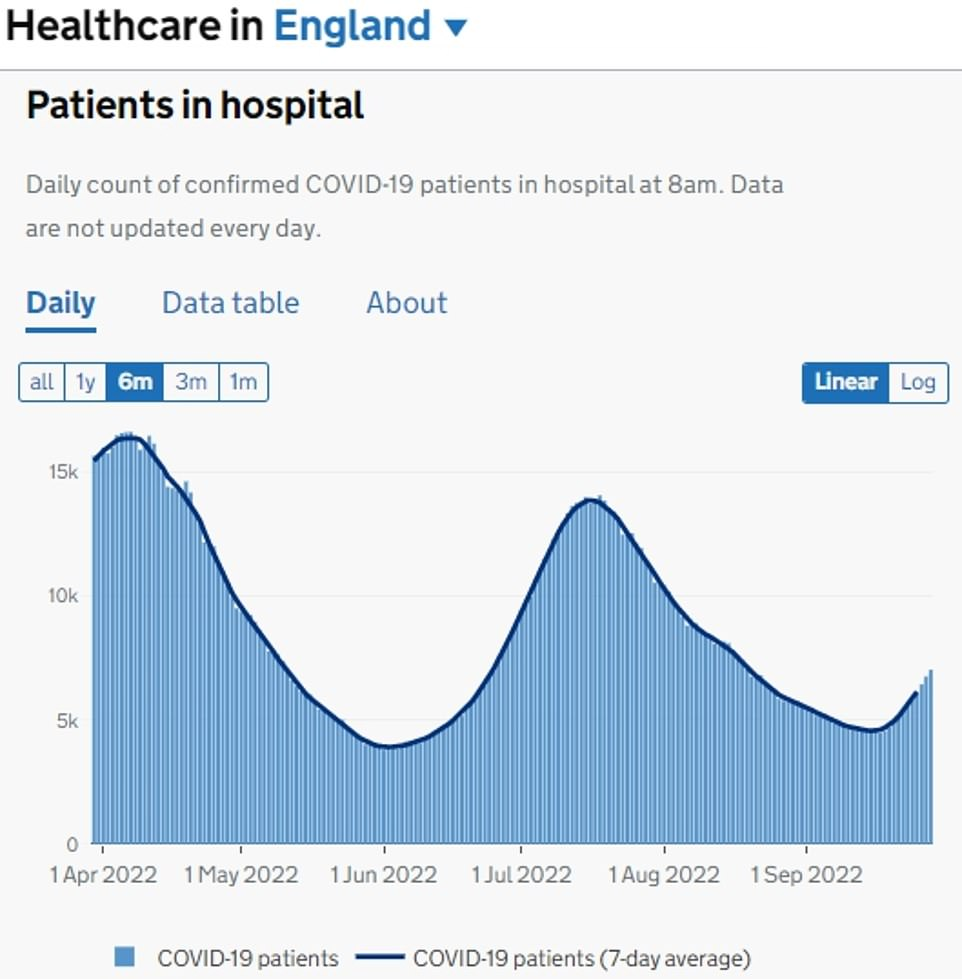 The Office for National Statistics (ONS), which tracks the size of the country’s outbreak, estimates cases have risen 12 per cent over the space of three days, suggesting pressure on hospitals is nowhere close to peaking.
Roughly 860,000 people in England are thought to be carrying Covid. 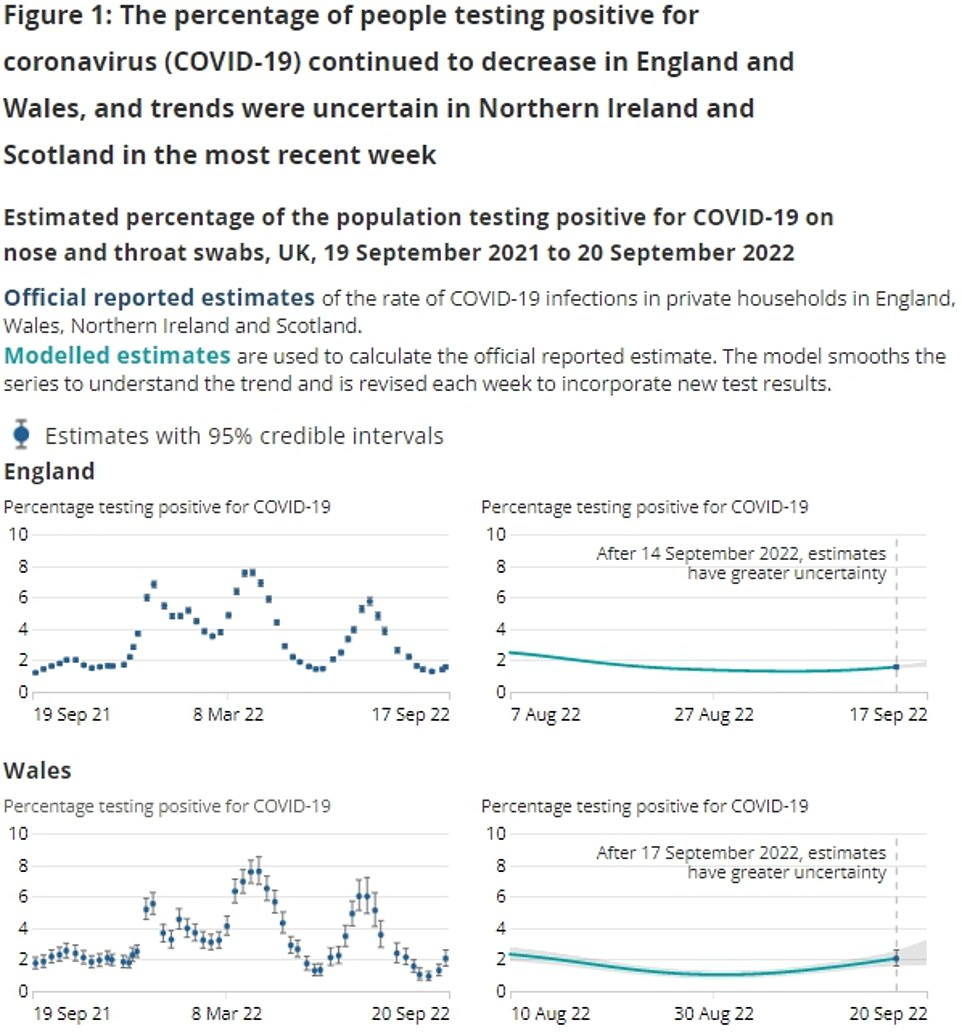 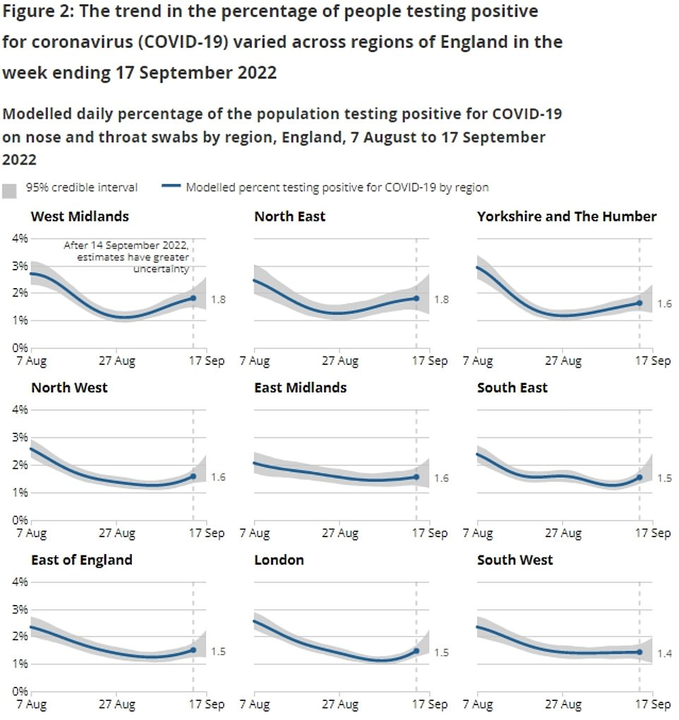 Hospitals have been overwhelmed all summer. Care backlogs have amassed to record highs, patients have been killed by ambulance delays and thousands forced to queue 12-plus hours in swamped A&E units.
The never-ending crisis, largely fueled by a lack of staff, has already forced one NHS trust in Nottinghamshire to start cancelling routine operations. Rationing care is the only way to ensure critically-ill patients get urgent care, bosses said.
Leaders fear the situation will only worsen as routine winter pressures begin to bite, with Covid and flu expected to combine to create a ‘twindemic’.
Dr Mary Ramsay, director of public health programmes at the UK Health Security Agency (UKHSA), said the data is ‘clear now that we are seeing an increase’ in levels of Covid.
‘Cases have started to climb and hospitalisations are increasing in the oldest age groups,’ she said. ‘In the coming weeks, we expect a double threat of low immunity and widely circulating flu and Covid, creating an unpredictable winter and additional pressure on health services.’
However, Sarah Crofts, the ONS deputy director for the Covid-19 infection survey, hit back, alleging its ‘too early to identify whether this is the start of a new wave’.
And although hospital numbers are increasing, the number of Covid-infected patients needing treatment remain well below the 34,000 in January 2021, before the Covid vaccines rollout had taken effect.
In addition, not all of these patients require treatment for the virus.
Only a third of infected patients occupying NHS beds are primarily ill with Covid, with the rest incidentally testing positive and receiving care for other conditions such as a broken leg or heart disease.
And the number of patients being treated directly for Covid is roughly an eighth of that of so-called bed-blockers.