By Jennifer Margulis and Joe Wang

According to the World Health Organization’s COVID-19 Dashboard, there have been approximately 9 million confirmed cases and 173,900 deaths from COVID in Africa as of July 2022. 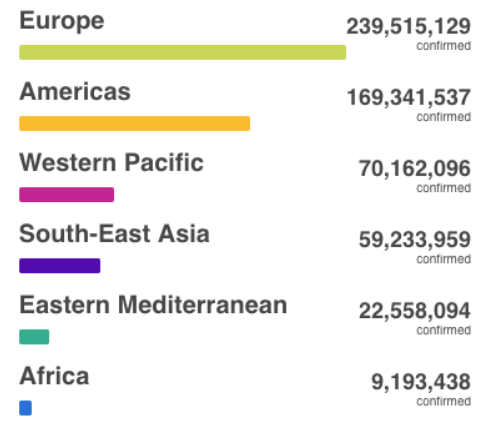 COVID-19 Cases By WHO Regions

These numbers are in sharp contrast to the rest of the world’s infection and death rates. From the start of the pandemic till now, Europe has reported over 239 million confirmed cases and more than 2 million deaths.

“We consider it like a simple cold,” said Illiasou Ibrahim, 53, who works with international non-profit groups in Niamey, the capital of Niger.

Niger is a landlocked country where malaria and meningitis are both endemic and the average life expectancy is only 63 years old.

Yet, Ibrahim told The Epoch Times, he does not know a single person who has died from COVID.

So, either Africans are simply not getting COVID nearly as often as Europeans or, when they do get it, they are not getting sick enough to report it. Either way, Africa is doing much better with COVID than Europe or the United States.

This is not what we would expect. Malnutrition, poverty, lack of access to clean drinking water make healthy living in many places in Sub-Saharan Africa difficult.

We have been told repeatedly by our public health officials that high income countries are more medically advanced and better suited to fight pandemics.

In a 2021 paper published in the journal Evolution, Medicine, and Public Health, a team of scientists from Duke University Medical Center actually predicted that African and other developing countries would have fewer deaths and better outcomes than more economically developed places.

They explained how that modern sanitation can cause a lack of biodiversity within the human body and that this diversity helps the immune system not overreact to viral or bacterial infections.

According to these researchers, the absence of intestinal worms, also known as helminths, among people in high-income countries compromises their health, making them more prone to severe COVID infections.

While proper hygiene is important to stop the spread of infectious disease, not all effects of hygiene are beneficial. In fact, too much hygiene may actually make people more susceptible to some autoimmune conditions, according to the hygiene hypothesis that was first proposed in the British Medical Journal by a British epidemiologist, Dr. David Strachan, in the late 1980s.

Although the conventional view is that commensal worms like helminths are disease-causing parasites with no benefits, emerging evidence suggests that intestinal worms are crucial for our immune function and overall health to thrive.

As Dr. William Parker, an immunologist and expert in symbiotic worms, pointed out in a 2016 article, they may “sound gross,” but helminths are responsible for stimulating the body to produce anti-inflammatory molecules and stimulating build healthy immunity.

Parker is one of the co-authors of the 2021 paper in which the researchers detailed how the loss of helminths in the body due to too much hygiene can cause a susceptibility to chronic inflammatory diseases such as autoimmune disorders and allergies.

This could explain why the morbidity and mortality rates from COVID-19 are higher in developed countries where autoimmune diseases and “biome depletion” are common.

Biome depletion refers to a lack of diversity of organisms in humans, which include our own human cells, as well as bacteria, fungi, animal parasites, and protists.

These scientists hypothesize that the main reason why COVID-19 has not affected African countries is because a majority of the population in a country like Niger cohabitates with helminths and these helminths prevent major adverse effects from the virus.

Another reason that Africa has fared so much better than Europe and America may be the widespread use of ivermectin, according to a team of researchers in Colombia.

A 2021 study published in the American Journal of Therapeutics examined the efficacy of ivermectin for prevention and treatment of COVID-19 infection. These researchers found that “using ivermectin early in the clinical course may reduce numbers progressing to severe disease.”

While ivermectin remains controversial, clinicians around the world have reported excellent outcomes using ivermectin as part of an early treatment protocol.

Measures That Made Things Worse

The aggressive treatments that have been employed in Western Countries to contain COVID-19 may, ironically, have actually been responsible for making things worse.

Illiasou Ibrahim told The Epoch Times that he only wore a mask a few times in the last two years but only to avoid dust and bad smells and that no one in Niger ever social distanced from each other.

According to recent science, the slogan “masks save lives” is not true.

In nearly every instance, when COVID infection rates in California’s Bay Area are compared in counties that require forced masking and counties that do not, rates are either higher where masking is forced or similar.

A 2022 study published in the journal Medicine compared the COVID death rates between counties in Kansas that had mask mandates with those that did not.

As Zacharias Fögen, a doctor based in Germany, explained in this study, people wearing masks unconsciously preserved droplets from the virus within their facemasks and re-inhaled them into their lungs.

So, according to Dr. Fögen, masking actually increases viral load, causing people to re-breathe particles that the respiratory tract has already purposely removed.

In 2020 a large randomized controlled trial conducted in Denmark, published in the Annals of Internal Medicine, found no statistically significant protective effect for people wearing masks versus people who did not.

Other science has shown that “moisture retention, reuse of cloth masks and poor filtration may result in increased risk of infection.”

As The Epoch Times recently reported, neurologists have found that masking can also compromise brain health.

Social distancing was another common measure put into place to slow the spread of COVID-19 in Europe and America, but was virtually unheard of in many African countries.

Dr. Byram Bridle, an immunologist from the University of Guelph in Canada told a reporter for The Guardian that socially isolating children limits their exposure to the natural world, which is full of microbes that help the immune system grow stronger.

People forced to socially distance lack microbes and are more at risk of suffering from an array of inflammatory diseases upon coming out of isolation.

Dr. Thomas Murray, a Yale professor of pediatrics and a specialist in infectious disease, has found this to be the case. As reported in a recent New York Post article, Murray and others are seeing a shockingly high rise in respiratory viruses following the lockdowns and school closures of 2020 and 2021.

Social isolation failed to stop the spread of COVID-19 in Europe or the United States. But forcing humans—both children and adults—to isolate has had negative effects on both our physical and our emotional well-being.

The Virus Versus Vaccines

While the low vaccination rates in underdeveloped nations have been framed as a problem of global inequity, we now have data that suggests that not vaccinating may actually have a protective effect and lead to fewer COVID deaths.

As explained in an article by Dr. Joseph Mercola, author of “The Truth About COVID-19” and a health practitioner who has been closely scrutinizing pandemic data, vaccination rates in Sub-Saharan Africa are less than 6 percent. Despite making up over 17 percent of the world’s population, Africa contributes only 3 percent to the global COVID-19 death total.

The unintended negative effects of high vaccination rates in developed countries like the United States are frightening. As of July 15th, 2022, there have been 1,350,947 adverse events reported to the CDC and the FDA via VAERS, the Vaccine Adverse Events Reporting System.

Included in these reports are 29,635 deaths following the COVID vaccines.

There may be other explanations for Africa’s better outcomes, including optimal vitamin D levels from sunlight and a population that skews younger. But it is highly likely that the diverse African biome, abundant with helminths and beneficial microbes; the lack of masking and social distancing; access to ivermectin; and the continent’s low vaccination rates have all put Africa at an advantage against COVID-19.

It sure looks like America has a lot to learn from Africa in terms of pandemic management. 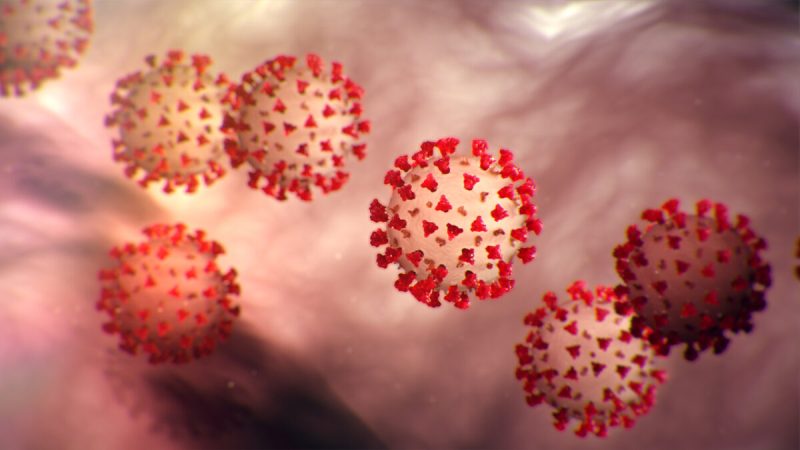 PrevPreviousUK Medicine Regulator Confirms COVID-19 Vaxxines Are at Least a Shocking 7,402% Deadlier Than All Other Vaxxines Combined
NextGermany Jab Injury – Frances, From GermanyNext
Scroll to Top