We know that any substance consumed by pregnant woman can be deadly to the baby. Big pharma ads don’t let us forget it, nor do the thousands of mothers working tirelessly in social media groups to inform each other about the things that can kill their kids.

When it comes to Dr. Fauci’s unholy clot shot, even the New York Times has admitted that vaccinated women are experiencing a chaotic menstrual cycle, and post-menopausal women have even started their periods again.

On Wednesday, a lion in the arena of public safety and research, Steve Kirsch, joined the Stew Peters Show to share what else is being impacted by the highly powerful bioweapon drug being shoved into the arms of deluded.
Mr. Kirsch believes the number of spontaneous abortions and miscarriages may exceed 400,000. And this is based on data from the DOD and underreporting rates in VAERS.

teachem2think
One of the things I really like about Stew Peters’ interviews is too often taken for granted: he keeps quiet and does not interrupt when someone is answering a question. He is listening intently and that sets an example we naturally follow.

Jay A.
Fauci should be hung by the nuts and force injected with his poison until it runs out his ears! (if he has nuts)

John Matrix
Mask mandates – they want to force our children (and others) to be good little faceless and expressionless robots, or drones or borgs. Take you pick. Pure evil in the action and pure evil in the making. Not only are the children’s minds perniciously invaded by being forced to wear masks by mandates, they are also robbed of their full interaction with other children and adults.

Cedar Cat
The “Narrative” is really Advertising. And as you may know, the law says advertisers are EXPECTED to lie about their products, “Let the Buyer Beware” or “Caveat Emptor”. So, I don’t call it the narrative anymore, I just called it the Advertising Jingle. The law says we must BEWARE of people advertising products. And this is precisely what this jab media campaign is all about.

Yvonne Forsman
ALL animals in the study DIED!!!! ALL of them!!! 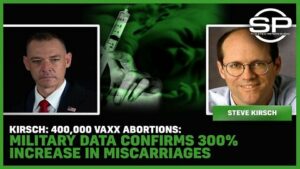 PrevPreviousGlen Wheatley Dies From Being Double Vaxxinated Like Almost 100 Australians a Day and Our Dodgy Government and Media Try To Spin It
NextCaitlin Gotze: 23-Year-Old, Died While At Work After Employer Mandated C0VID VaxxineNext
Scroll to Top